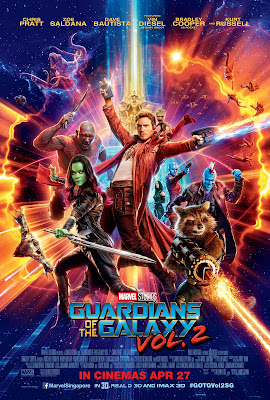 The A-holes are back in their 2nd quest to save the Galaxy! Where they will not only be hunted dead by new and old enemies but Star-Lord himself will meet someone that he thought he'd never find! Packed with hilarious comedy, more space action than Star Wars and another classic mixtape - here's why Guardians Of The Galaxy Vol. 2 is the best Marvel film, maybe ever! 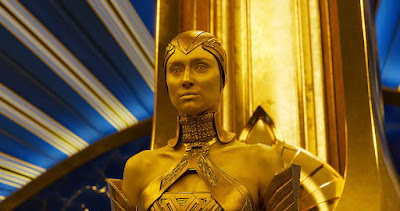 In 1980, Meredith Quill (Mother of Peter / Star-Lord) is shown a beautiful alien seedling by her boyfriend whom she calls a "spaceman" in Missouri. Thirty-four years later in 2014, Peter and his newfound family are renowned heroes after defeating Ronan the Accuser.
After doing a job for the all mighty gold xenophobic species "The Sovereign" and running away from them, does Star-Lord and his family of misfits come across a man he wasn't expecting to find! But this discovery holds dark secrets behind his Destiny and he'll need his real family to help save him and the galaxy!

Back on Monday 8th May, my friend / sis Mils treated me to Guardians Vol. 2 because all of my friends and her had already seen it but she was willing to go see it with me again. We had a late night IMAX screening and enjoyed it very much and ended up saying Night at 12:45am after catching up and having a heart to heart talk like always. And most importantly, stating some ideas about our futures and we'll always be friends and I was really pleased how things were on a roll for her with her future with Craig! Bless her cotton socks! :3 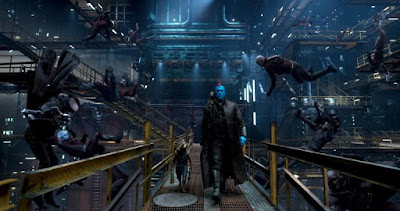 The film crashes to the ground in style, blowing everyone away by it's superb sequel story which evolves the characters instead of being a film where they go on another adventure. This time, it digs into the future of the characters and their ties to each other because of Peter's newfound interest in discovering a being who claims to be his long lost father. 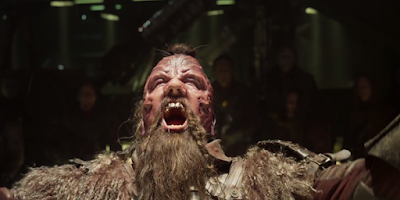 But the film also emits a lot of change including enemies falling out and causing "mutiny" which even for me was an astonishing outcome and changed the face and code of what Ravagers stood by. But after lots of delay and tense moments of watching a few suffer whilst also laughing badly at the name "Taserface", does everyone collapse for good as those two stroll through the ship. 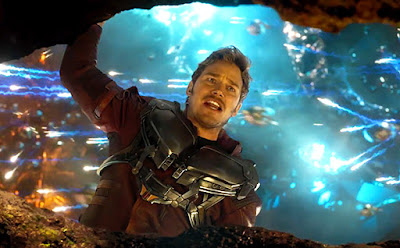 The content was still comedy galore but besides that mass killing on the ship to which I've just mentioned above, the story is quite dark and violent. Which is the atmosphere we should expect from a borderline Marvel film which holds back the gore but doesn't on the level of adult content especially killing. I like that about this film and it's prequel because it's teenage / adult rated and appeals to us more than the do-gooders who don't get to really say how they feel. It's how I would be and even if it's censored, it's still fantastically funny as rude and obnoxious characters can funnily be. Even that Mary Poppins reference was unexpected and is forever now a meme for that character and film to have referenced including The Hoff.

The new worlds were jaw-droppingly stunning. Ego's world was the place of paradise but it was also slightly creepy to learn of it's connection to him and interesting when he tells his history of his very being and his connection to Peter. His place of Eden (which is not it's name) was a thing of beauty. 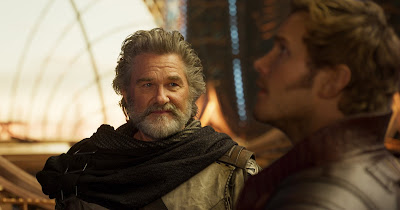 I had a suspicion just before midway that something was up with this Celestial being who really wanted his Star-Lord. I was intrigued to learn about their history and see their confrontation about the delay and heartbreak till they shared a little moment of "playing catch" ha.
But later sh*t hits the fan as not only does Polygamy but also learning the cold truth just leaves the audience astonished and astounded by this dark treachery. 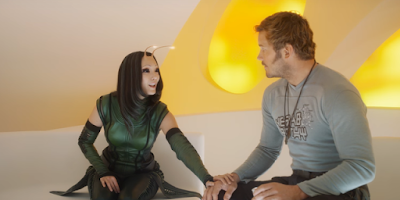 Now onto the comedy, which came from everyone but mainly fell out of Rocket and Drax's mouths. Rocket's was a sh*t-stirrer view whilst Drax's was unknown rude yet hilarious remarks at his new and slightly dim and empathetic friend Mantis (Ego's companion). That scene with Mantis revealing her ability was hilarious and one of the best moments in the film.
Drax's questions during the Father and Son moments broke the ice and could even crack a planet with the amount of cringe that he ended up honestly spilling and emitting from his gob. Whilst Rocket was trying to hide his feelings (which Yondu points out later) yet he's still that wise-cracking "racoon" that even he denies actually being.

My heart fluttered and I had to refrain from shouting "AWW" whenever I saw Baby Groot on screen. That little bobblehead sized cutie was adorable and would always make the crowd aww out loud. He may have been small and cute but he had a child like personality of hardly speaking as frequently as last time but also attacking people and things that annoyed him easily. It was creating a contradicting mixed view of the little guy but he was brilliant throughout and I'm pleased that Vin Diesel returned to provide the altered voice for this tiny twig who could still put up a fight but in a cute way. 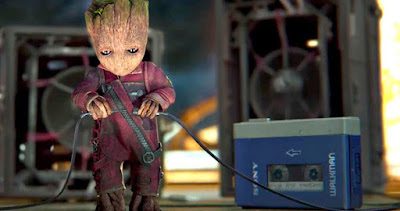 Many of my friends made similar comments after the first film had been released 2 years ago about how "they just wanted to know what's on that f***ing mixtape". But after seeing the film, I can safely say that the Soundtrack was just as good as the first one. With classic but new discoveries for me to open my taste in music but I was not totally clueless since I recognised Surrender by Cheap Trick and Mr Blue Sky by Electric Light Orchestra. That adorable dance in the beginning was the perfect ice breaker just like Peter's good dance in the first one to Come And Get Your Love (my fav song from the previous film). Just like when I went to see the first film, I was clueless to these songs (Mum recognised loads of them when I showed her the first one last year). But I did recognise Sam Cooke in this one, just not the song. It's fascinating how this film turns the soundtrack industry upside down by showing off cassette classics that will appeal to adults and fans of nostalgia whilst also providing a great score by the same man as before, Tyler Bates. 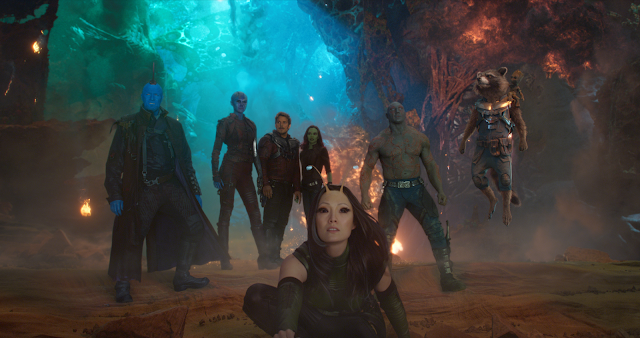 The ending is quite huge full of emotional stirring because of several ultimate sacrifices and people showing their true colours. It was a planetary scale of epic fighting with powers and loads of factions coming together for the party. That hyperspace jump was hilarious seeing their faces jiggle and swell up as they pinball across the cosmos to their friends.
It was quite sad in the ending (not as sad as Logan) but proved that tough guys can surprise us all and I can't wait to see the Guardians return, hopefully for Avengers: Infinity War. I'd like them to announce themselves as Rocket translated for Groot "The Guardians Of The Freakin' Galaxy, only he did't say Freakin'".
Word of advice, the ending credits holds 5 post credit scenes and the last one might be connected to the last Infinity Stone. I'd love to see this again if I can since Rebecca is wants to see it but I shall be seeing the new Alien: Covenant film this week!
You've probably seen this film by now but don't you agree, it was Awesome?

Email ThisBlogThis!Share to TwitterShare to FacebookShare to Pinterest
Labels: Films