Volunteering At The Nuts Challenge, March 2017 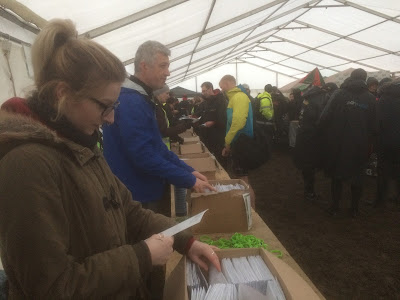 Last Sunday was actually my first time volunteering with friends at an event that I was surprisingly comfortable with. And I'm really looking forward to attempting a different Mud Assault Course with a new team that I've grown rather fond of over a year.
Anyway, here's why I volunteered with my friend from Bootcamp at The Nuts Challenge near Holmwood. 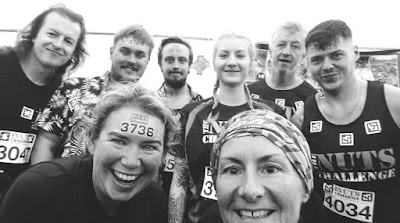 As I mentioned last year, I met up with Aimy (a woman I've known since Chesworth) back in April and after a park run one Saturday, I've integrated into a great friendship group who also love to exercise and have great taste in music like me.
A couple Wednesdays a month, I've joined Aimy, Ikin, Phillip, Ant, Simon and Ryan with Aimy's fitness instructor mum, Claire for her Bootcamp in the park where we all do supersets for an all body hour long workout together with body and resistance techniques. I aim to go once or twice a month since I juggle my gym membership at the Pavilions In The Park whilst this year been taking one week off a month to chill and work on things.

So last year whilst getting to know them all, they mentioned that they do a similar Mud Run like Tough Mudder, only this one is cheaper and after what I saw on the volunteering day, it looks more tougher and well worth it!
I couldn't join them last year so I decided to join them this year as a new course to conquer and get down n' dirty with new people (that doesn't sound right...)
But first, most of us decided to volunteer at the Winter event near Holmwood so that we'd get a big discount on the Summer one in September. 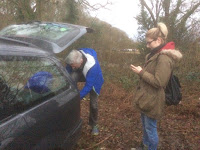 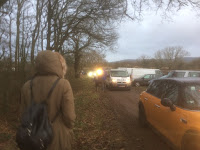 Our early Sunday morning rise at 5:00AM was tough for me to get up to but I managed and was scrubbed and had extra layers and wellies on to be prepared for the worst of weather. Claire arrived at mine at 6:20AM with Ikin, Phillip and Aimy ready to head off for our day of helping people get muddy (Simon had fallen ill and Ryan was getting a tattoo done). 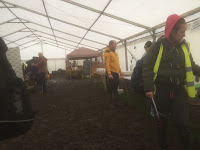 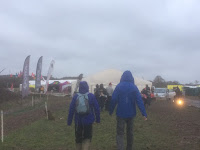 After arriving at the event on someone's land in Holmwood, the dark clouds clashed as the man upstairs turned on his shower and boy did it come down! I was relieved that I wasn't doing it with them this time and that we were luckily gonna be in a tent for the day doing Administration together.
Iain and Daniel (Claire's friends) met us there and we all lined up behind a long bench in the big white tent by 7:15AM, ready to begin as people took shelter in the big white tent. 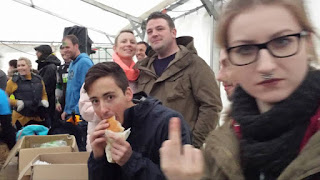 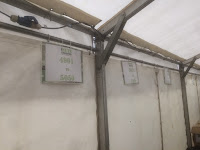 Our main instructions were: when people come to our number point e.g. 4500-5000 (people's registration numbers), they give us their number and we find their paper document for them and ask them what their T-shirt size is so that we can give one to them. 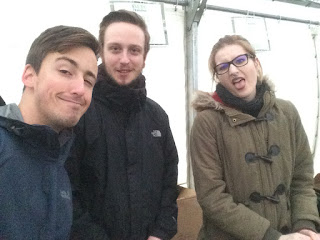 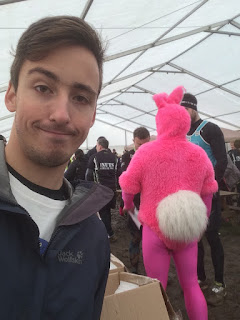 Then we ask them if they have done Nuts Challenge before, if they haven't then we explain it to them (if they have then we don't need to explain the details). Inside their document is a sticker sheet, a big number for them to put on their torso and 3 small square stickers to put on their centre shoulder and top of chest (these will help cameras and photographer identify their number for people to look for their pictures on the website).

There is also a sicker for them to put on bags if they wish to leave them in lockers in the other white tent outside. They can help themselves to a Nuts Challenge Green Band beside me and we have heated changing rooms if people need to clean / warm up afterwards. Other than that, enjoy themselves and do their best! There was even a Pink Bunnyman... yeah!


The Nuts Challenge is different to the set 10-12 Mile Tough Mudder that I've done twice. This one is done in set Laps (1 Lap - 7KM) with a maximum of 4 Laps - 28KM. People will have already registered their set lap distance and the further you go, the more harder the obstacles. If I can do 20KM / 12 Mile TM then maybe in Sept, I can do a 2 or 3 Lap Mud Run... *he says confidently*
Plus in honesty, you get a medal at the end - compared to getting just a different coloured headband and finisher t-shirt at the end of a TM. Plus TM is way more expensive than Nuts, so do the math.

The morning started off wet, loud and packed but the job became easier as time went on. People were polite and gracious with our service and it was interesting doing my first customer interaction like a retailer since I've always worked behind the scene in warehousing.
We all had Bacon Butties for Breakfast and Ikin and I were working together for the first couple hours (we'd take in turns with fetching he t-shirt and telling the info to the runners). 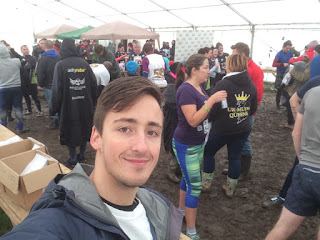 By 10:00AM, the sun came out and brightened the mood but had no effect on drying up the sloppy, wet and deep mud that we were all in no matter where we were at the event ha (thank goodness for wellies). It began to die down on registration after 11:00AM because at every o'clock, a wave would go out to do the course. 4 Lap Runners at 8:00, 3 Lap Runners at 9:00, 2 Lap Runners at 10:00 or it just became the time onwards for only the 1-2 Lappers to participate in only. 2:00PM was the closing time on the event so everyone had a deadline. 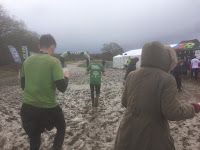 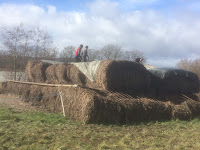 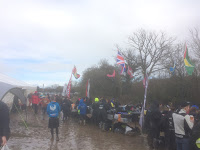 By 11:30AM, it had quietened down so Claire suggested that Aimy and Ikin to take me a bit round the course to see what it's like. Since the sun was out, it seemed more easier to take in besides wading through the thick mud and huge puddles across the land. So many people were coming back coated in greenish / brown dry mud but many were also escorted by Paramedics and helpers because they were suffering with Hypothermia. Several people had space blankets and teammates were supporting them back to the main tent, I guess this event is way more intense than I'd imagined and the weather didn't help either. 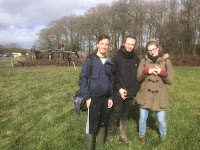 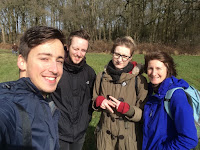 Claire came out to join us shortly whilst Aimy and I were reminiscing Chesworth memories that I pointed out as well as learning and sharing thoughts on someone close to her who was suffering with similar bowel disease to what I have. I explained my limits, history, medication and foods that I have learnt that set me off quicker like a laxative sometimes.

I even took a SnapChat video then screenshot snaps to make this 5 set picture of why you should hold your nose before sliding into the muddy water, you don't want that sh*t up your nose!
I'm looking forward to doing this with these lot because it's something new and with great company! 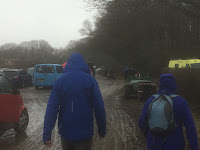 So we finished at 1:00PM and were prepared to head back to the car before the sun was extinguished and a torrential downpour was unleashed to send us off home soaked in the car...
And after thanking everyone for that productive morning, I relaxed on the Sunday and ended up having a 3 hour nap before 6:00PM ha. 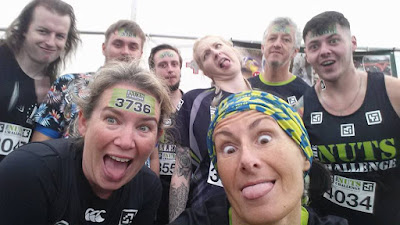 Roll on 2nd September when I'll be tackling the NUTS Challenge with my awesome tattooed friends! I wonder how different and more muckier it'll really be compared to Tough Mudder? But I know I'll conquer it and it'll be well worth it, overall! Plus I have Horsham 10K that I'll be doing in May, a week before Comic-Con! And let's not forget my Milano Relay Marathon that I'm doing on 2nd April! *wink*
Posted by Josh Grahame at 23:00