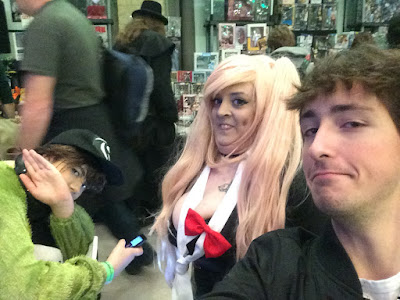 I really enjoyed last Saturday where I returned to a smaller London Con after 2 years and I got to meet new and old faces again for the day. I really loved hanging out with my friends and I also got to try out some first time Cosplay Photography.
Here's what happened at London Anime Gaming Con, Feb 2017! 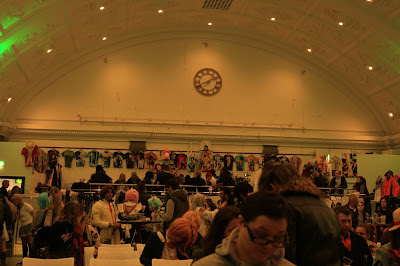 This small Con which is over at The Rocket Complex London Metropolitan University is like pocket sized compared to London MCM Comic Con at the Excel Centre but what it lacks in space or things to do is the less stressful and crowded environment to try out a smaller Con than going to a place where it's so overcrowded. Though I enjoy both (well I think MCM might be better in May as I'll be going more than one day to see people and I will hopefully have made my Mewtwo Cosplay)...

My 2 main reasons for going up was to see Beki again (whom I went with 2 years ago) but to also meet Nicole for the first time, having failed to have met at MCM back in October due to my lack of time. But this time I got to spend after midday with her and I loved it!

I was delayed on Sat morning and made my way to London and got to the University just after 12:30 and I found Nicole outside. She was cosplaying as Junko Enoshima from the Dangan Ronpa Anime. I got to meet a few of her friends and we ventured around the small con and went upstairs where we watched some people come up on stage to dance around to some obscure music and the performance was tedious if I'm honest. But at least the people on stage got to enjoy themselves instead of freezing up like I would do. 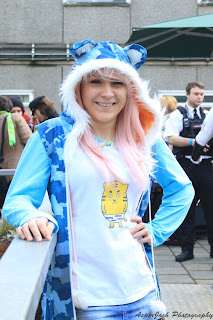 We came back downstairs and Beki had finally turned up with her group. I've known Beki since like 2010 when I went to Portsmouth to see my friends and went clubbing with them (good night). She came as Super Sonico (google her if your a guy). And after catching up since May's MCM last year, I asked her if I could photograph her which she was happy for me to do so.
I'm no professional but I think my first attempt wasn't bad but to be fair we were in a cramped courtyard and it was hard to angle myself or ask her to kindly act out for me since I'm not as creative or experienced so suddenly. But maybe at future Con's I might be able to capture better shots as it'll help me learn more about Photography and will help boost their profiles. Be sure to check out her Cosplay page!


I said I'd look for her later, to which I failed to do so but we promised to hang out again pretty soon since we don't live that far away from one another.
So Nicole and I headed back inside to another area of the Uni where different gaming groups were playing old and new consoles whilst an episode of Fairy Tail (a mainstream Anime that I adore and have yet to fully tackle and catch up on) was projected on the wall in a corner. Nicole found another group of her friends and shortly after, her friend Ryu turned up as Ryu from the Street Fighter games (possibly the most accurate cosplay I've ever seen).
He was such a nice guy and hence too which was perfect for portraying the famous fighter, I'd seen him once cosplay as a bench Pikachu with Polly (a lady I'd had a picture with at October's MCM). Check out his Cosplay page! 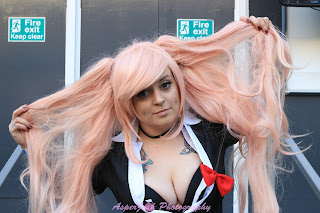 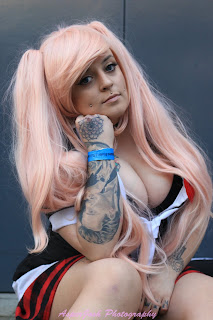 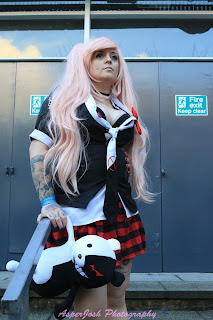 Nicole went outside again and with her other cosplayers from the same Anime, got some photographs down by a professional who had the lighting too, I had a chat with Tony too once they were done because I was keen to learn some more from him. Check out his Facebook page!
I asked her afterwards if she wouldn't mind me taking a few snaps to benefit us both. She did great and I was doing my best to remember settings to get the ISO, Aperture and Shutter Speed as best as possible. I asked her to pose a few ways (not like that) and I think I did pretty darn good for some outdoor photography. I'm so pleased and happy to have photographed with her as it was good learning experience! Be sure to check out Nicole's Cosplay page!

As it was reaching nighttime, Nicole, Ryu and I popped down the road to grab a Subway before returning. I managed to meet Alice who came as Poison Ivy which I had some trouble getting the light right because of the dark room and little light exposure but my picture was heavily liked on Facebook which means I did a good job. She was lovely and I hope to meet her in May and get to chat a little more. Check out her Cosplay page! 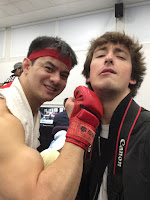 We went back upstairs where the show was earlier on and this time it was a karaoke session for people to sing J-Pop, K-Pop or Anime songs and dance a long co-ordinatedly. Nicole's friends came as a Deadpool and Male Harley Quinn who she caught up with whilst I popped off to say goodbye to Ryu (get a picture of getting whammed) lol. I aim to find him in May again. 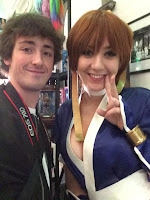 And I did see a gorgeous and almost identical cosplay of Katsumi from the Dead Or Alive games. Jenna was so polite and so accurate! I had some trouble of adjusting the colour because of changing camera settings for background brightness but I did get a selfie with her. I didn't catch her name (I did later on Facebook) because of her Cosplay business card she gave me so I could tag her in later. Check out Jenkini's Cosplay page! 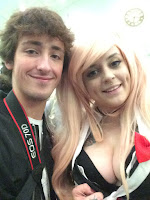 I got back to Nicole and shared a big hug as thanks for today's fun. I aim to see her again real soon before MCM hopefully. She was gonna be at LAGC tomorrow to be up on stage to show off her cosplay but I couldn't make it for another day sadly due to other plans.
So my long journey home began whilst I was Snapchatting all my pics of the day. 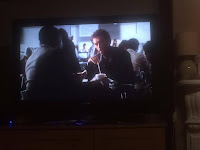 I decided in the evening to message Kurt and Leanne to go out for dinner with them since I hadn't seen them since before Christmas. So I drove to Crawley to pick them up and we ate and caught up at Harvesters. And then came back to his to talk about Tattoos (I'll be getting my first one in Autumn) and Leanne and I encouraged Kurt to watch the first episode of House M.D (I'm still working on that post). I loved seeing them again and will do ASAP. 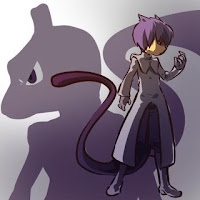 So my last Saturday was great and much more chill than the intense atmosphere at London's MCM. It was great meeting new people at a smaller venue instead of being on a tight schedule at the big leagues which only happens twice a year and had tons more to do and thousands of people to get through. I sadly didn't get to find Lottie or get to see Marc again who it turns out was coming on Sunday lol. But I'm sure I'll have better chance in May.
I hope I can get round to creating my Mewtwo Gijinka Cosplay for May. I do recommend this Con in Feb and later in July if you wish to get a taste of the Anime Con experience unless you feel brave enough to go to the MCM one first...
Posted by Josh Grahame at 07:00