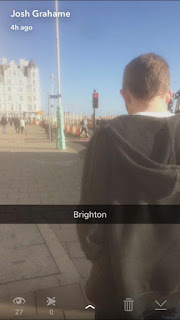 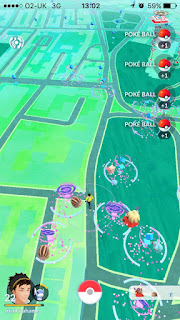 Last weekend was a great Saturday when the sun came out and Franklin decided that we should head to Brighton to hunt the recently updated Pokemon Go 2nd Generation release. It sounds a little childish and eccentric, but it was an excellent day and the fun continued in the evening as loads of us celebrated Purdew's birthday at his place. I've got more posts lined up soon but here I'm showing off my collection with one of my best friends in Brighton.
Honestly, I'd actually deleted the Pokemon Go app several weeks ago after just getting tired from the lack of opportunities to go exploring to find less common Pokemon and the fact that the days when it had been released had died down because everyone was busy.

But thanks to Matt "Franklin" and Kurt notifying me on Friday last week, that the app was getting a huge update with over 80 new Pokemon from the Johto Generation (2nd Generation), I was encouraged to redownload it again.
So Franklin suggested that we should have a day out in Brighton on Saturday, to go hunting the new batch and just to hang out since it'd been ages since us two had just hung out outside of the group we're in. Plus he showed off his Umbreon he caught the night before Brighton, but I managed to get one by the evening after looking up the name for the evolution technique.

The sun came out for us on Saturday and reached about 15degrees at 1:15pm to which we arrived at Brighton because Franklin drove us there whilst I was playing with both phones to activate the PokeStops whilst we were queuing to get into the city.
Matt suggested we eat at his favourite Mexican subway style place called Tortilla. It was a tasty choice and I was being adventurous and had a great burrito with the mild salsa, guacamole, beef and vegetables.

We then set off around the lanes and up and down the coast in search of new Pokemon. Matt had trouble staying in the server but he did manage to get the Totodile by the pier (I didn't)... next time I won't miss the next one I find! 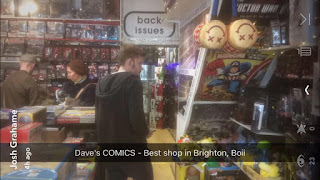 I then told Matt that I'd lead him to the coolest Comic-Book and Anime store in all of Brighton, Dave's Comics. I highly recommend this place in the lanes when your next down here as it's 2 stores near one another with a ground floor and upstairs area full of figurines, Manga, Marvel, DC, Adventure Comics, POP Vinyl figures, graphic novels etc. It's like The Big Bang Theory Comic-Book Store or like the Forbidden Planet in London. I was also pleased to hear that he's interested in watching more Anime especially the classics like Ghost In The Shell and Akira... I can't wait to see his reaction lol.

Franklin remembered that there's an eccentric beer and ale shop not far from the comic-book store called Trafalgar Wines which has unique flavoured alcohol.
We ended up passing by it twice whilst hunting Pokémon but once we found it, he was automatically intrigued by the cool looking Dinosaur Ale (after all, Dinosaurs are cool). I got a bottle too and a different fruit cider than my usual Koppabergs. And he got a drink which was like 13% (which I can tell you made him very merry later in the evening) ha. 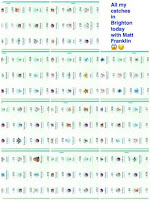 As for the evening, it was Purdew's birthday so he had me, Franklin an 7 others round his. I bought him a nice Red Wine and some Pe**s Pasta from Ann Summers as a laugh since I liked the idea of one gift being cheeky and the other being generous (something that a lot of people do their gift giving).

The night was really entertaining. We tried out this game called Balderdash - available here. It's a game where you need to write down bluff definitions for words. It was a bit confusing since everyone was drinking at the time as well, ha.
But eventually we swapped over to the much more entertaining Cards Against Humanity (one of my all time favourite card games besides YU-GI-OH). If you haven't played that yet then you haven't lived! But beware it contains foul, dark, and offensive humour and encourages it ha.
We also played the 21 Drinking Game where you must go round in a circle and speak your chronological number but when someone gets to 21, they can change a number to be an action / replacement word. If you fail to follow the procedure or forget your number, then you drink. To which we all did a lot since the game almost got people wrecked.
By 2am, Ben and I stayed round Franklins and I drove us home before 11am.

So last weekend really was a good Spring Saturday. I admit that I am still sorta still into Pokemon Go but I'm not as dedicated as I was when it first came out before realising how badly my mobile data would almost get used up. But it was a good excuse to hang about with one of my best friends and overall just be a really cool day.
As the Pokemon Company begins to release more Pokemon (or at least improve the loading time or stop the game from closing when your trying to even start it), I'm sure more fun days like this will occur over time and as the summer will arrive in a long while!
Posted by Josh Grahame at 21:30

Email ThisBlogThis!Share to TwitterShare to FacebookShare to Pinterest
Labels: Anime, Games, Life, Me