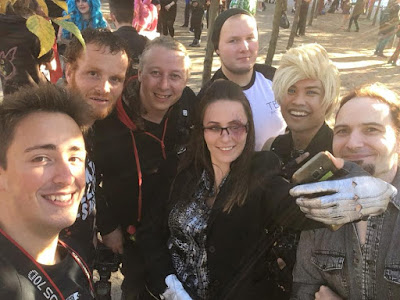 Yeah I know it’s late but with my first MCM Birmingham coming up this weekend, I figured I’d best share what London’s MCM was like in October. I got to spend 3 days doing photoshoots with friends and new ones whilst staying up in a hotel alone (next time will be with my Con group). I've been all over the place most of last year since this was finished on 15th March 2018 (despite programming this post for a past date). But I aim to finally begin returning here to write up some delayed work and explain what I've been up to in 2017 and 2018.
Anyway without going on and on, here’s what I got up to at MCM London’s October Comic-Con 2017!
This Con was a big one in effort but also rewarding because I went all out (bit off more than I could chew) by booking new and previous friends for 10-15 min photoshoots across all 3 days alongside other amazing and really nice Photographers. It’s thanks to May 2017’s MCM that after taking my camera with me to just photograph anybody that I was encouraged to try a more professional and organised approach this time and it helped I had my Facebook Page set up too.

There’s no need to state what happened per hour on the hour or whom I precisely had booked per timeslot. Basically I did 10-15 min photoshoots for everybody and am happy to share a load of photos up on this blog post and link my Cosplay friends pages if you wish to see more of their work!
Also be sure to follow the link to my page if you wish to see all 3 albums!

I ended up staying alone at the Premier Inn at the back of the Excel Centre nearly at the last minute for about £430 for Fri night till Sunday morning. It’s amazing how prices skyrocket because of an event...


I had no trouble getting there an hour earlier to when I aimed to begin and drop my stuff off, head back out and register in the Centre and head straight outside the West Entrance to set up my area and share a picture on my FB Event and page for people to spot me.
But right before heading outside, I had one thing I aimed to achieve first - parking my Stark butt on the Iron Throne for 9 photos at £20 and I even got to wear the Crown and hold Jon Snow’s Sword too. This was all because I started Game Of Thrones at the beginning of August and I binged 4 Eps a night almost for a couple months and got to Season 7 by Con (and watched the last 7 Eps with my cousin as he encouraged me to finally start it after years delayed) haha. I felt quite proud and epic for doing this little stunt before heading outside to begin working.


And so began my busy day of taking photos of Cosplayers that had asked to shoot with me (thanks to discovering my Event on my page).
I was really polite when approaching people and gave compliments too to break tension and asked everyone “Is there any poses you wouldn’t mind doing for me” as well as showing them the pictures as we went a long to check they were happy with the results.
I felt it was my duty to follow through this way, not only because it was my first time but also because I wanted to gain their trust and show them my honesty and compassion to make sure they were happy with the results and working with me.
One thing that’s annoying about the Photoshoot area is “snipers” men with long camera lenses who don’t ask permission to take photographs and take sneaky shots of Cosplayers as well as stalk them and the photographer and shoot alongside them very obnoxiously. I calmly told a few to wait until I was done as well as to ask my firing first instead of disturbing our session, I mean come on!

Unfortunately nothing can be done but at least me and a load of good people spent time watching our friends to also stand near em to protect them from being Sniper unknowingly just because of the Cosplayer they chose to wear.

The most rewarding thing I learnt about Con in October was the fact I gained the confidence on the day to ask people for weren’t booked with me for some pictures but also I was able to just talk to people as myself to get to know people and start new friendships too.

I also took the liberty of doing a Selfie with everyone I had booked with me or people I asked to take pictures of because it was a record I'd have to show my future self when doubting my confidence but it'd be a folder to share on my FB whilst all the photography shots went up on my Photography page. I'm actually contemplating on doing another one at this year's MCM or to perhaps do a "silly selfie" album with people if their comfortable with it and are up for a laugh too.


One of the things that I understand from this Con is that I was shooting with very basic gear - a 18-55mm f/4.5 lens which comes with the camera compared to the other photographers shooting with more expensive and better Prime lenses than mine. Sure it affected my confidence but it didn’t stop me from putting all my knowledge to the test and to achieve what I could and the most important thing is that my friends were happy with my work!
I feel this was the reason why I went overboard and overbooked myself to work non-stop from 10:30 - 17:30 on all 3 days because I was trying to compensate my effort despite not having a lens I felt was as good as everybody else’s. Lesson learnt though but it’s good that I’m aiming to purchase a Sigma 35mm f/1.8 Lens in November because this lens will not only help me achieve stupendous detail and bokeh but it’ll all be a step forward in my career and dream to achieve more professional work and someday become a professional photographer too as a job!

I also had the pleasure of meeting other Photographers including Kieron, Brandon along with seeing Tony again since last May and meeting Keith for the first time after we'd been talking on Facebook for several months.
I'm amazed by the encouragement, compassion, determination and positivity that these men all share and to one another including me. It's truly amazing to be in a community where it's not so competitive but more encouraging as we show each other's work, suggest ideas and rather than criticise negatively or compete, we just encourage each other to keep at it!
It's an amazing community that I'm proud to now be a part of!
Even during a group selfie with the other photographers, it's funny how Kathy took one of her own (trying to steal my thunder, aye?) haha. I loved meeting her during that weekend too as she was a Cosplayer I'd heard loads of positive and admiration from my friends about. She was really fun and a laugh to work with and I get why photographers can laugh and feel easy when shooting with her ha. 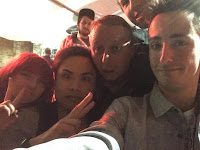 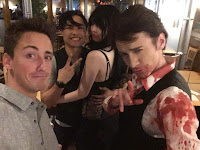 On the Friday evening, I got to hang out with Hayley, Chai, Alfie and Brandon whom I'd all met randomly in the day and got to chat and take some pics with them. They invited me to The Fox (the main bar for Comic-Con shenanigans and I got to have a laugh and some drinks with newfound friends on my first night. 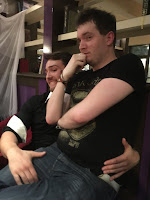 And on Saturday night, I found Kyle, Jamie, Katherine and Megan after seeing them briefly in the day (my main Con family and friends minus a few others). They were all already merry by the time I met them at a bar in The Holiday Inn hotel ha. And it was an equal evening of inappropriate laughs and behaviour as usual with these people, that's why it's fun.

As for Sunday late afternoon, after achieving the last of my shoots as the sun went down and the temperature began to plummet, I decided to share a few drinks with a special friend I met this year back in May's MCM, Hannah.
We were waiting for Marc and Lee to return as their part of a Final Fantasy VII group I shot on the weekend. But we had a laugh doing Snapchat selfies and recordings along with singing merrily to all sorts of nerdy theme's being blasted loudly in the Fox including Hooked on a Feeling and The Might Morphin Power Rangers theme *sigh* oh the memories. It was a shame I couldn't stay for another evening as I made my long way home after collecting my suitcase from the Premier Inn first.

It took me a couple months to get through the 2,004 pics I achieved across the 3 days - Friday 602, Sat 641 & Sun 761. I learnt from this experience a great deal of things including that it's okay to take loads of pictures but to actually upload the best couple or handful instead of every single shot you took because you think that's what the Cosplayer expects. And also that I did overwork myself because I truly was trying to compensate my effort and skills despite using a very basic lens compared to everybody else's prime lens work.
From both things, I've learnt how to reduce the stress and work for me to edit in Adobe Lightroom when it comes to this weekend's first Birmingham Comic-Con. And I now own a Prime lens myself since November 2017 and won't need to try harder than before since I can now achieve crystal detail if I focus just right. And most importantly, I aim to begin giving myself more time to relax as Con instead of devoting myself non-stop otherwise it just becomes stressful and so much work to do when sometimes you might not get something out of it. But it doesn't mean I'll stop or quit the effort, I just need to remember to fit in a lunch break haha.

To everyone I got to do photoshoots with as well as meet at Octobers's MCM, I thank you with all my heart as you all help me grow in confidence and knowledge and help me continue to strive to be my own self instead of comparing myself to other photographers but I also welcome their guidance and positivity with my results and onwards outside of Con.
I am blessed to know you all and can't wait for the future Cons to see and do more work with you all!!!
Posted by Josh Grahame at 09:00