The Fault In Our Stars (Film Review) 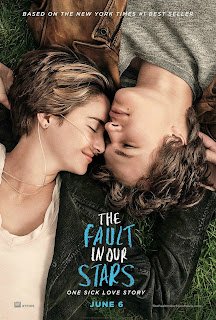 Cancer affects everyone in tragic ways, it intrudes people's lives and crushes their hope. But for Hazel Grace Lancaster (Shailene Woodley), she has already accepted the fact that she will die someday and hasn't bothered with friends or socialising. But after meeting Augustus Waters (Ansel Elgort) at a Cancer Support Group does she begin to smile, enjoy herself and most importantly fall in Love before the end of the line.
See here why The Fault In Our Stars is a beautiful drama love story that will touch your heart. 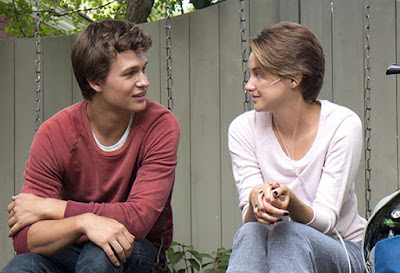 The story is narrated by Hazel here and there and explains her painful history/ memory of her life and struggling to live. For her to give into her parent's encouragement, leads her to a handsome surprise when she meets Augustus at a Cancer Support Group. The fact she's reluctant to get close to him or anyone because as she sees it "I'm a grenade and at some point I'm going to blow up and I would like to minimise the casualties, okay?" But that doesn't stop Augustus from showing her how "That's the thing about Pain. It deserves to be felt" and they will both slowly fall in love in the most wonderful way; "I fell in love the way you fall asleep: slowly, and then all at once" (I too wish to fall in love that way too because it sounds so pure and cute.

I've had this in my draft area on Blogger for a while and I've decided to upload it now to get it over with. I won't let this emotional post like The Land Before Time make me sad at the moment as I had a relaxing fortnight in Greece with my family and have had a tough come back into work but at least the hardest time of the year is over now for me and the others. But I've had this ready for a while and have been finding it hard to decide when to upload it without trying to make others think that I'm sad for having written this up or uploaded it at all.

I've been meaning to watch this film for ages but I finally got round to it after a while this year (I think it was May). But back in Greece 2012/ 2013 or whatever, I saw many people around the pool were all reading the same intriguing book by John Green and it had somehow caught everyone's attention as if it was the next best seller (like in 2011 when everyone couldn't get enough of reading 50 Shades Of Grey)!
But at last on 21st May, I got round to watching the DVD that Rebecca bought me for Christmas last year. Boy, was I in for a night of being heartbroken but it did surprise me a few times. It was different to watching My Sister's Keeper because even that looks predictable but this film catches you and it's a tragic love story for our star-crossed lovers (all the more crushing). 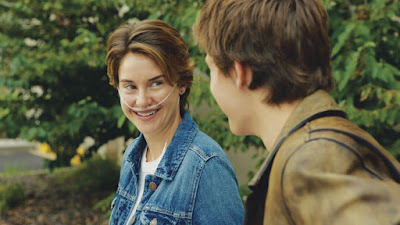 This film was wonderful. It lifted me up and dropped me several times as you can expect from the Cancer atmosphere as well as everything that Hazel and Gus have to endure in the story. I liked how the film was different to My Sister's Keeper (plot-wise of course) and this story had a love essence which helped show the quiet and not so popular love brewing up between two people on the brink of dying any moment. It was like watching two friends that you begin to learn about and even though you don't know them in person, you can still relate to their pain and sorrow whilst smiling at how pure their love is. I do intend to read the book as I want to get into reading more like the Harry Potter, Narnia (well it's because I want to learn more about those series and the Narnia films are on hiatus it seems) maybe some others too because reading is what I lack in right now haha. 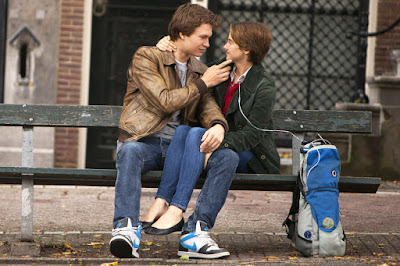 It was tough to see how these two doomed teenagers had no salvation but they still have a wonderful time in their lives that I'm sure others would recall and talk about forever. Plus they both shared a fulfilling goal in the story to do with a famous book An Imperial Affliction and finding the author who surprisingly turned out to be played by the voice actor for Gill in Finding Nemo and he was the Green Goblin in the original Spider-Man film *wink*.
But in a way, it was nice to see these two actors together again since I saw them as brother and sister in the Divergent film series, hang on, that's a little awkward... (that reminds me, I need to read those and see the second film).
Right now, Hazel was one of the most out-standing teenagers I've ever seen (part of it is because I haven't really seen a woman before having to live off of oxygen and she had to carry hers in a suitcase 24/7) but it's also her graceful beauty which is quite captivating, if I'm honest. And Gus was an admirable young man who knew how to smile through everything and helped others express their pain (even on his trophies haha) as well as see his remaining time through in a not so fearful and crushing view. 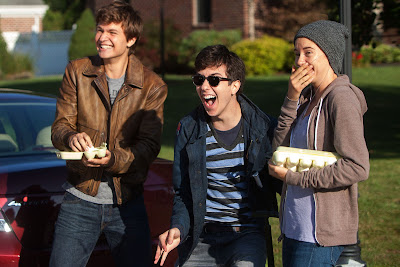 Even their friend Isaac (Nat Wolff) was a victim and friend to these two and mid-way brought a fun moment into the film.

I think this story shows how even if things look short or will inevitably end, it's best to make best with all the time you have and treat those memories forever like in 5CPS and in my up-coming long post Clannad. Even if you end up looking back on life and you either lost someone, failed something or wish things had been different, you know everything happened for a reason and we must accept that (something I'm still learning to this day)!
I think the film shows how you can still find happiness before it's taken away from you. In a light-hearted way, it resembles everyday life on how happiness comes and goes and it's up to you on looking for more ways to keep yourself happy (it might not relate to this at all, but I think it's something that I can see in it whilst trying to ignore the sad reality that it shows).
And there are lots and lots of quotes which range from simple to long and after seeing this film, they have a deeper impact even how romantic the word "okay?" is expressed

The soundtrack is rather beautiful, full of gentle orchestrated pieces with slow piano moments to grab us along with songs including the emotional Kodaline - All I Want, the hit song that I heard in the charts for a while last year Charli XCX - Boom Clap (I had no idea it was made for this film but I like her Break The Rules song a little more), the heartwarming He Is We - All About Us (Feat. Owl City) (which wasn't featured in the film, only featured on the soundtrack).
But most of all, the gripping song sung by the gingerbread lad Ed Sheeran and his remarkable song All Of The Stars. When Ed's song came on at the credits after hearing the uplifting and tear-jerking song M83 - Wait during the uplifting and tearful ending, it got me for the 4th or 5th time of weeping in tears thanks to how his gentle voice tells a love story as well as explain how it's over thanks to Death itself.
But this remarkable video shows hundreds of papers of quotes all romantic, uplifting, emotional and from the film together.
It's still a marvellous piece of work compared to his usual guitar and skyrocketing work.

I want to express these 3 off-topic views because I feel they tie in to my post and the whole relation on Death that I believe and find a greater understanding from, I wonder if you will too.
I feel a bit of peace and comfort from hearing these 3 different points of view on Death and how it can be a peaceful thing after all (well, maybe not the last one):
- Gandalf The White - The Lord Of The Rings: The Return Of The King
Gandalf explains to Pippin about how "Death is just another path, One that we all must take". I really like the whole concept because it's different to the usual beliefs including Religion. This is like a journey/ scenery to help comfort those who are afraid. The fact he is old and wise, helps add the emotion we see, plus it's Sir Ian McKellen! And hearing that gentle music introduction to Into The West and ending to The Grey Havens makes the moment more mysterious and captivating.
I believe in telling loved ones in the future (as well as for the other example) on sharing this vision of reassurance instead of leaving them scared in their final moment (of course, I'll be an emotional wreck then too, I admit whole heartily).
*Video contains spoilers from The Lord Of The Rings: The Return Of The King!* 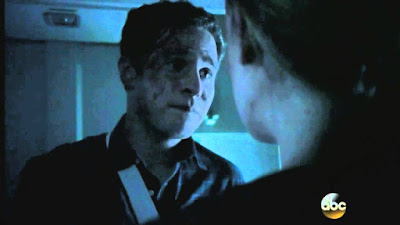 - Jemma Simmons & Leo Fitz - Marvel's Agents Of Shield (Season 1 Episode 22)
I like that in this one scene of the last episode of Marvel's Agents Of Shield Season 1 how these 2 love birds (who should hurry up and get together) end up talking about a scientific theory of death and what becomes of people. It looks like they are both doomed to die (so it seems) but Jemma Simmons (Elizabeth Henstridge) talks to Leo Fitz (Iain De Caestecker) about The First Law of Thermodynamics and this is what she says. 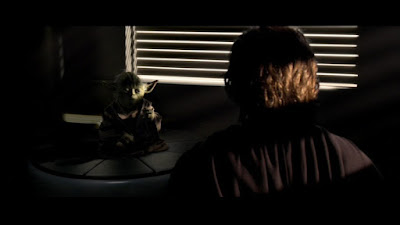 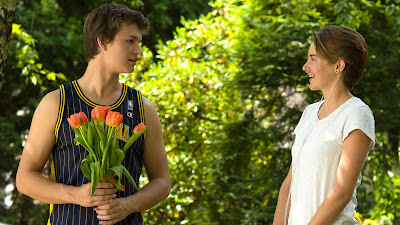 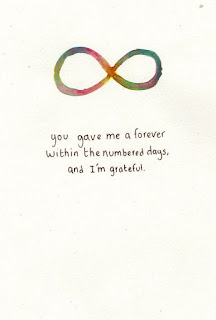 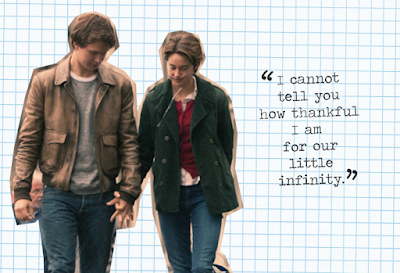 Email ThisBlogThis!Share to TwitterShare to FacebookShare to Pinterest
Labels: Films, Life, Me