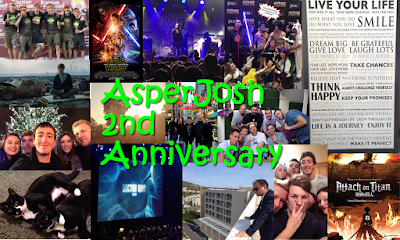 Another year passes and I continue to grow in confidence along with making more new friends, going out and living my life and most importantly, learning to love myself for the way I am.
Can't believe that I achieved 25,000+ Total Views on this little blog! I can't thank you all enough to making me feel so special and for taking the time to read my thoughts, love you all!
And now I've reached my 2nd year of working on this little project and it's really becoming a part of my life now and makes me feel spectacular.
What a year it's been for me:
- I saw Crown The Empire with Katie, Rebecca, Sean and Dean.
- Went on a little short date with Jemma.
- I had my family from Greece come and stay with us for a long week.
- Explained my backstory on being diagnosed with Aspergers Syndrome.
- Continued training hard around Beech Road Fields and Colgate Forest for Tough Mudder.
- Saw Avengers: Age Of Ultron.
- Wrote up my awesome review of Attack On Titan (still can't wait for the next season and more manga chapters).
- Watched the Doctor Who Symphonica Spectacular with one of my oldest friends, Ellie (after Comic-Con).
- Conquered Tough Mudder with my team mates (can't wait for September's one at Holmbush Farm).
- Dash & Stache turned 1 in July.
- My friends Caleb and Leanne got married.
- Had an awesome summer with my best friends.
- Celebrated Mils' Birthday Pool Party and Lip Sync Battle.
- Finally bought my Macbook Pro to begin re-learning code (still trying to get round to doing that)...
- Went out on Dave's Stag followed by his and Carol's Wedding Reception.
- Had a new adventure in Greece at the new Ikos Olivia Hotel.
- Finally started online dating (which has been going okay and I've been using multiple apps).
- Made new close friends at MCM Comic-Con, October.
- Wrote up Chronicle and explained some dark thoughts.
- Went to Winter Wonderland.
- Wrote up my enormous Star Wars huge posts on the Original and Prequel Trilogy.
- Saw the long awaited Episode VII: The Force Awakens.
- Had a wonderful Christmas & Boxing Day with my family.
- And had a fun and well worth it New Years with my friends I made at Comic-Con this year.
How has your year been? I hope it's been just as Awesome as mine!

As for this year's highlights:
- Watching Deadpool "The Merc with a Mouth" in February.
- Spending Ash's 21st in Spain with the other hooligans.
- Seeing Issues (standing) in May at London's KOKO with Lewis.
- Followed by another MCM Comic-Con adventure.
- Star Wars Comic-Con with Matt in July.
- South Africa with Matt, Katharina, Becky and 6 others for a week in September (wish me luck!)
- A week later, it's time for Tough Mudder South London, this time at Holmbush Farm near me.
- Actually going to see Bring Me The Horizon (standing) in November at O2. 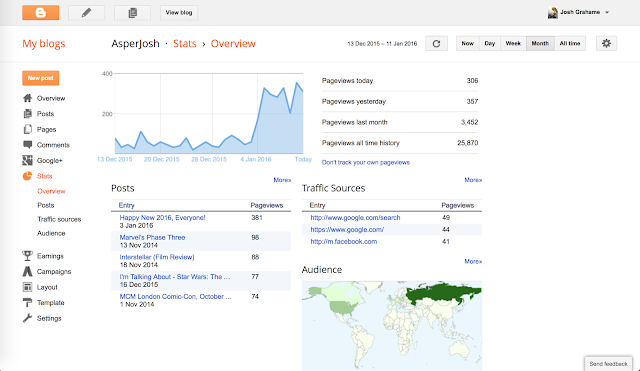 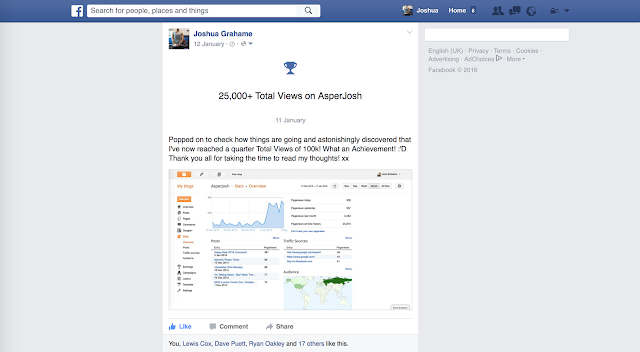 I can't thank you all enough for making this little project to become this successful and within 2 years! I feel honoured and proud of my work but also for having entertained and maybe even educated all of you and I aim to continue doing so. 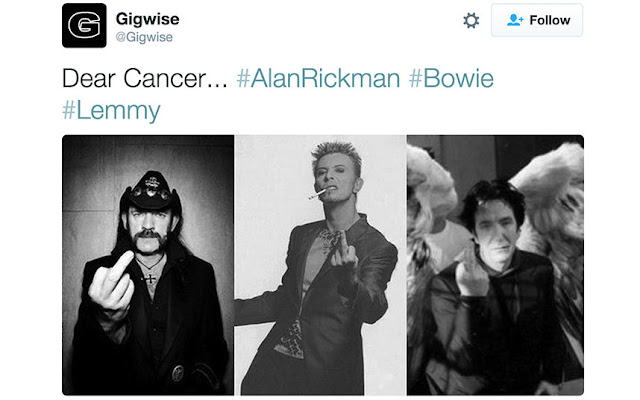 I want to pay tribute to 3 Legends who Death caught up with this year already (even if I didn't know them personally or enough). Cancer is a b*tch.
Lemmy (Motörhead) - Admittedly, I only knew "Ace of Spades". But as I YouTube'd the link for the song, I discovered a cover version of Metallica's "Enter Sandman" and thought it was equally amazing as the original.  This picture sums up how I'll maybe turn out to be at least one day in my future as a father someday haha.
I took a quick peak at some of their top songs and believe that now it's worth a better discovery even if it's super late and after the main man has passed away.
On the day of his passing, I was with Lewis, Elliott and Mac playing Poker and when we saw the news, we paused the game and sat in silence and paid tribute to this legend by listening to Ace of Spades... R.I.P Lemmy Kilmister!

David Bowie - I only heard, "Space Oddity", "Starman", "Heroes" and "Let's Dance" compared to thousands who knew him better and were affected more by the tragic news. I still haven't seen 2001: A Space Odyssey or Labyrinth yet (I seem to be missing out on many famous songs and films, it seems) but it's better late than never, right? But back in 2006, Mum did point out to me when I watched Arthur & The Invisibles a long time ago and she was so surprised and glad to see that Bowie voiced the baddy Maltazard. I admire how he is an idol to millions and my parents and many others remember growing up with him and I wonder how I'll feel when one of my idols/ treasured artists passes away when I'm older... R.I.P David Bowie!

Alan Rickman - I gave my own little Facebook tribute to this legend who died shortly after Bowie.

I may not have a wand of my own (yet) at the moment. But this moment represents Wizards and Witches around the world...
Posted by Joshua Grahame on Thursday, 14 January 2016

January has sadly been a bad start to the year it seems for many but it can only get better, right? We must continue to treasure their work and memory from every time we press play and watch and listen at their masterpieces as they continue to make us smile, cry and warm our hearts.

It's going to be a great year for me because I'm going to Africa with my friends in September. It will be an experience of a lifetime and I can't wait to go!
Plus I REALLY must encourage myself for the better to knuckle down on re-learning code so that I can go for a course/ exam someday this year and hopefully get the dream job in IT, I really need to do this. I need a better job.

But my long delayed and HUGE post which is still in construction which is quite dramatic, deep, psychological and serious focuses on expressing this confusion, rage and drama with music videos and lyric examples along with pictures of me shouting and pulling faces into a microphone... yeah. It's going to help me so much when it goes up on here as I'll be venting out my issues/ problems all for the better plus I'll be showing off my music taste with examples from Linkin Park, Crown The Empire, Issues and Bring Me The Horizon. I'll be using lyrics and shouty music (I encourage you to listen even if you turn the volume down) because whether it's the whole song or a sentence, some lyrics really affect me or matter to me because they represent how I feel when I enter this state.
I won't give in to believing that this music is poisoning me since I do like Rock and Metalcore music, but when you're in a depression/ confusion and you end up listening to too much of this, you create an "earworm" and feel that it's true. That's why I've been working so hard on this post so that I can confess my feelings (to a certain extent) and you and I may even learn something (I'll learn who my real friends are and you will have learnt something dark and serious).
But know that it will all be helpful for me because their is no punching bag at the Gym sadly, so I need to vent out my anger somehow!

Plus on another note for this year, I've decided to write up some Anime reviews, including the emotional Clannad, the nostalgia history of Pokemon (series + films), the deep classic Spirited Away and maybe some others like the apocalyptic Neon Genesis Evangelion (funny how I was supposed to do these last year). The Clannad and Pokemon one are more important to me because I like digging deep into things and they both have unforgettable experiences for me whether it's enjoyable, emotional and unforgettable which is why I want to state it all in the upcoming posts. I hope you'll take a look or even become encouraged to watch them for yourselves (I'll be careful on the spoilers...) 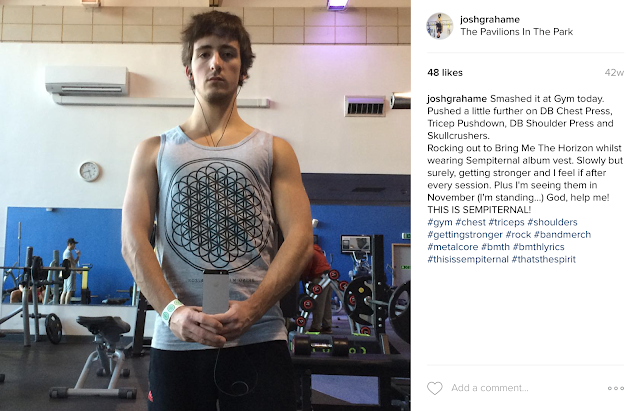 I have a lot to be grateful for and every day, I get stronger (picture shows it), push myself and learn to overcome things... slowly but surely. And even when I come home from stressful days at work, I come home to a loving family and 2 little ones who warm my heart every single day. Plus I've been out on 2 dates last month which took guts and I have a feeling my next one might turn into the start of something new...

Again, thank you all for making my words and thoughts to feel so meaningful as well as comfort me with just the fact that my posts go up in numbers and the Facebook likes and comments mean so so much to me. I don't know how to thank you all besides doing you proud by continuing my work and seeing what challenges and wonders life has in store for me!
Posted by Josh Grahame at 07:00

Email ThisBlogThis!Share to TwitterShare to FacebookShare to Pinterest
Labels: Life, Me, Music